San Francisco: Richard Wagner's "The Ring of the Nibelung" in Summer 2011 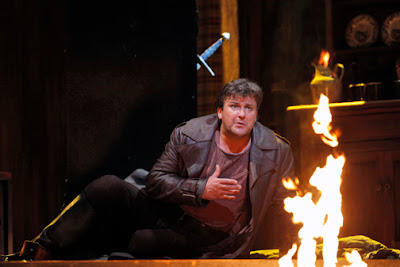 In June and July of 2011, San Francisco Opera will present three complete cycles of Wagner's "The Ring of the Nibelung" ("Das Rheingold," "Die Walküre," "Siegfried," "Götterdämmerung"). While the cycles are only available by subscription as a four-opera series, single tickets are available for the production-premiere performances of "Siegfried" (Sunday, May 29, 1pm) and "Götterdämmerung" (Sunday, June 5, 1pm).

Zambello has worked at many of the world's major opera houses. Her staging of this past summer's "Die Walküre" received raves from critics and audiences, according to the San Francisco Opera press release.


"Ring" Festival 2011
Beginning this September, a diverse array of cultural and educational institutions will present lectures and symposia, exhibits, musical performances, film screenings and other events throughout the Bay Area for audiences who desire to connect with the work in new and compelling ways.


The World of Wagner's "Ring"
The World of Wagner's "Ring"--A Composer's View Hosted by the San Francisco Conservatory of Music
Composer Conrad Susa ("The Dangerous Liaisons," "The Love of Don Perlimplin") will serve as guide in an examination of the power and scope of Wagner's great "Ring" cycle. Those who are familiar with Susa's charming style will relish his reverent - and irreverent - insights. Come explore these vast structures in a journey through sagas and mystery, a journey into your own soul.

Popular posts from this blog

The Wagner Society Zoom Events May 2021

May 03, 2021
The Wagner Society Zoom Events May 2021 • 5th May: “The Sea, music and death”: Wagner and Virginia Woolf with Dr Jamie McGregor (prt 3/ 4) • 7th May: Frida Leider, with Eva Rieger • 12th May: Roger Neill, topic tbc • 14th May: From Goodall to Longborough, with Anthony Negus • 19th May: Dr Mark Berry, topic tbc • 21st May: Wagner in Buenos Aires, with Eduardo Bennaroch • 26th May: “Nothung up my sleeve”: Wagner and James Joyce with Dr Jamie McGregor McGregor (prt 4/ 4) Events cost £5 to all members (including all non-UK Wagner Societies), £10 for non-members (refundable on joining) and free for students/under 30s. Please book here: https://wagnersociety.org
Post a Comment
Read more